…I don’t know what I'm hoping for from you, but I always feel a bit better after looking at your website.  One word sums up my life, boredom.  I don’t even want to talk about my job, it’s storeroom work and it takes boredom to a whole new level.  My home life at this stage is nearly as bad.  Our son and daughter are both married and myself and my wife were never much good at discussing things, so we just watch television….  I'll be retired in a couple of years, and I don’t know what I'm going to do with myself.  I don’t even enjoy the pub.  If I was an alcoholic at least I'd enjoy that…. Have you any ideas about where I might go from here.  I'm pretty desperate as it is.  Thanks.  John

By the way, don’t envy alcoholics.  I've known a lot of them, but I never knew any who were enjoying themselves.  Some of them may well have been in flight from boredom, but they ended up in a worse place.

You are not alone in suffering from boredom.  It’s a quite common state of mind, and despite the explosive development of the entertainment industry – hundreds of TV channels, the internet, cell phones, etc. etc. – many people are more bored than ever before.  This suggests that it is not about the landscape: it’s not about what is ‘out there’; it is about ourselves, our perception.  Dylan Thomas once said in a radio interview, “Someone’s boring me, and I think it’s me.”

Every inch of the world is interesting in itself in some way; the problem is when we lack the interest to look at it.  I told a group of teenagers that I had the perfect solution to boredom.  It’s a simple solution: open your eyes!  I've taken a lot of close-up photographs of things – such as these leaves – and on that occasion I projected a few dozen of them on a large screen.  I was gratified later to see two or three of those young people lying on their stomachs in the garden, eyeballing some dead leaves. 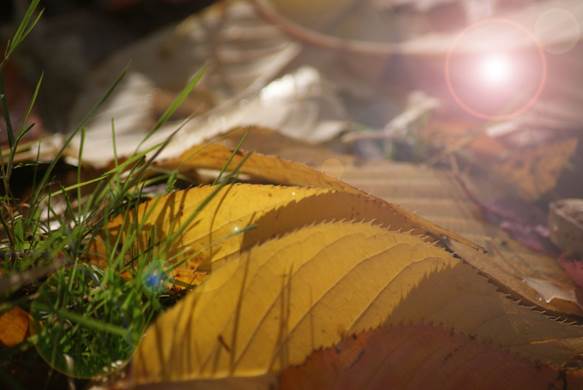 We trap ourselves inside our minds, where we live through language alone – I mean through descriptions of things rather than the things themselves.  The two words ‘dead leaves’, for example, don’t do justice to the billions of colourful autumn leaves we see at that time of year.  The words are a boring, depressing description of a world that is in reality enchanting.

There is a great vogue for ‘Mindfulness’ in recent times.  You see courses on mindfulness advertised everywhere.  It’s not well named, because it’s precisely about getting out of your mind – getting out of the imprisoning, boring world of abstract descriptions in the mind, and coming to your senses.  “Open your eyes,” we can tell ourselves, but don’t forget to open all your senses: see, hear, smell, taste, and touch everything.  A sculptor placed a sign near her pieces at an exhibition: “Please touch!”  It was the opposite of what you might expect in such places – but how life-giving by contrast!

In relation to work: even if you are doing the same task that you did a hundred times before, it is new every time.  Every moment is new and never happened before.  Time doesn’t repeat itself.  What I do now is not the same as what I did before, but an abstract description of it is.  Sameness comes from our minds; but look around and you see that the world knows little or nothing about sameness;

So, what can I suggest, John?  Why not experiment for a while with just looking at things – in the park, in the garden… or in your wife’s face?  Then let the interest develop.  Take time to experience things rather than walking past them.  If you think that attending some sessions on Mindfulness would help, why not try that?  It would be less expensive and more interesting than a visit to the pub; and it might just be the nudge that could set your life on a new course.

If you want to read a few more things on boredom on this website, there were questions in ‘Between Ourselves’ in 2004 (twice) and in 2015.